Choose from 4 different routes with a private guide

Choose from 4 different routes with our guide Denis who will meet you at our base in Killarney at 8.30am for your private guided tour and drop you back between 5pm and 6pm.

Denis has been riding motorbikes exclusively since he was a kid, and doesn’t even have a car licence! As far as he’s concerned – “cars are big, clumsy, boring awkward things and totally impractical for exploring this wonderful world of ours, especially mountainous or coastal back roads and trails”. He’s been guiding tours for years in Ireland, France and Spain and loves what he does.

Choose from one our BMW Rental Motorcycles equipped with panniers and a top box.

Your tour includes a helmet for the rider and pillion.

Our local Guide Denis will take you on the best routes there are.

All our bikes are comprehensively insured, once you meet our insurer's requirements. See T&C's.

A mixture of incredible biking roads along the northern part of the Ring of Kerry.

Ride through ancient woodlands unchanged since the last ice age, winding roads through high mountain bog lakes and the outstanding Kerry Highlands and high passes few tourists ever find such as the biketastic Ballaghisheen Pass.

Time permitting you will visit both Cahergal and Leacanabuaile Stone Forts dating back 3,000 years, Valentia Island and amazing views over the Atlantic from the Fogher Cliffs or the Kerry Cliffs near Portmagee on the Skellig Ring.

This route takes in some of the best views along the southern part of the Ring of Kerry along Kenmare Bay visiting ancient Celtic sites such as the Loher and Staigue ring forts before turning into the Kerry Highlands and remote mountain boreens, through the epic Ballaghbeama Gap, Knocklomena Pass and Black Valley a world apart from civilisation before returning to Killarney via the Gap of Dunloe.

Beara is a very special place, with some of Europe’s most stunning and otherworldly scenery. It’s for good reason that this peninsula gets rated highest by all who do this day tour.

The ride begins along Kenmare Bay and up into the Gleninchaquin Valley and Stone Circle, an area inhabited for approximately 4,000 years before being abandoned during the Irish potato famine. An area of more natural beauty is hard to imagine, but that is just for starters as the landscape changes as we head further west along cliff roads to visit the Hag of Beara, last of the Tuatha Dé Danann “tribe of the Gods” who were a supernatural race in Irish mythology.

From here it’s a ride out to Dursey Island (once used by the vikings for selling Irish slaves) through Castletownbere, once the most fortified port in Europe to eventually ride over the brilliant Healy Pass.

As always my route will take in roads and locals off the beaten track while still riding the highlights such as the Slea Head cliff drive, the Conor Pass, ancient celtic forts and a variety of stunning roads and views before returning to Killarney via the Caherconree pass.

All routes are customisable to suit both advanced and new riders. Special consideration and changes to the routes can easily be made for anyone with specific interests such as photography, history or just a mixture of everything. Easy roads, fast roads, empty or slightly more adventurous single tracks, we have them all just a short ride from Killarney. Denis will help you get the most of your trip, but for any major changes or specific custom routes prior notice before your arrival is essential.

Pick up and drop off will be at LemonRock Bike Rentals at the Brehon Hotel. It’s recommended all day tours should begin at 8:30am at the latest to get ahead of the coach tours and with an aim to return between 5 and 6pm. Many of my tours lead into remote areas so it’s not always possible to find Starbucks coffee and fine dining, there will be coffee and lunch stops along the way but it’s highly advisable to bring snacks and water with you.

Please note each route is approximate as changes can be made as we go to cater for lunch stops, traffic, weather conditions, roadworks or other unforeseen circumstances. It is each individual rider’s responsibility to adhere to the speed and traffic laws at all times and to ride safely within his/her own limits and skill level. Your guide’s first and overriding priority will be safety, as such all riders must accept the pace of the rideout will always be based on the slowest rider.

Due to the nature of the roads and conditions in the region groups are limited to 6 motorcycles not including the guide. Larger groups may be catered for depending on the experience and organization of the group. In this case please contact us prior to booking.

Don't just take our word for it..

Facebook Tripadvisor Google-plus
"My guide Denis, was courteous, professional and fun, I really couldn't have asked for more!"
Trinie L.
California, USA.
"There is no better way of exploring the WAW than to do it with Denis as your guide."
Alistair S
Lancs, UK
Does this look like fun? Book your tour today!
Book Motorcycle Tour 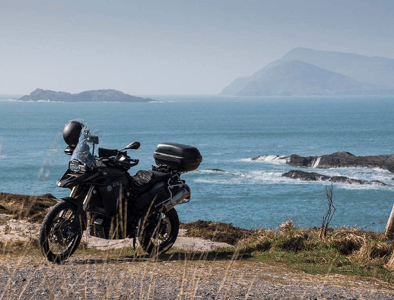 5 days, 6 nights riding the 3 Peninsulas on the Wild Atlantic Way. 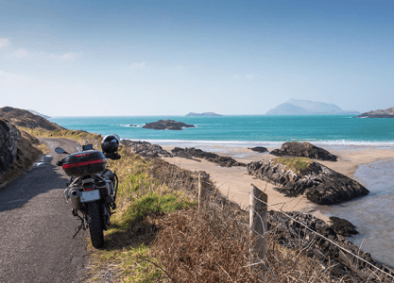 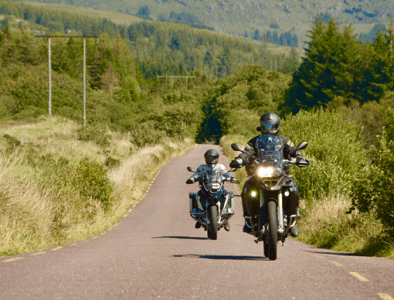 Take the Classic tour with more rest days to enjoy your surroundings.
Comments are closed.